Mr Angus Waddell is a highly experienced consultant ENT surgeon in Swindon who treats both adults and children. His subspecialty interest is in otology and middle ear surgery. His areas of expertise include vertigo, dizziness, tinnitus and hearing loss.

Mr Waddell graduated from London University in 1990. He trained in London, the South West and in Toronto. He obtained his fellowship in general surgery from the Royal College of Surgeons in 1994 and his fellowship in otolaryngology in 2001.

Mr Waddell is an honorary senior clinical lecturer at the University of Bristol. He has been a medical school examiner for over 15 years, covering seven undergraduate academies in Taunton, Weston, Bristol, Bath, Gloucester and Swindon. Mr Waddell is an FRCS examiner for the Intercollegiate Diploma of Head and Neck Surgery (DOHNS).

He is a consultant surgeon volunteer and camp leader for the Britain Nepal Otology Service (BRINOS), where he organises and runs "ear camps" in Nepal to treat local patients and educate Nepali surgeons and community ear assistants. It is for this work that Mr Waddell and his colleagues won the BMJ Medical Team of the Year Award in 2013.

Mr Waddell’s research is published in peer-reviewed journals, including Emergency Nurse, The Journal of Laryngology & Otology, The Cochrane Library and International Journal of Surgery.
Read more

What is dizziness? Dizziness refers to feeling light-headed, off-balance, faint, like you are spinning, or like things are spinning around you ...

What is otology? Otology is the branch of medicine concerned with the study of the ear and its diseases. This discipline is part of otorhinolar...

What is tinnitus? Tinnitus refers to the hearing of noises that are not caused by an external source. Often heard has a ringing or buzzing soun...

What is hearing loss? Hearing loss is a reduction in hearing sensitivity affecting one or both ears. It can be classified by type and degree.&a...

Mr Waddle made me feel very relaxed at the appointment. He was very easy to talk to and helpful. I was very grateful for his time and professionalism. Thank you!

I knew of Mr Waddell's excellent reputation and in the past had received first class treatment from him. He was excellent this time as well - empathic, friendly, professional and efficient. I received superb treatment and always recommend him to friends.

Top Doctor! That's what I say... Mr Waddell instantly put me at ease. I felt confident that he would get to the root of problem, and come up with a diagnosis. I was in extremely competent hands. Informed. Reassuring, Expert. Reassuring / warm. Highly recommended! Brilliant! 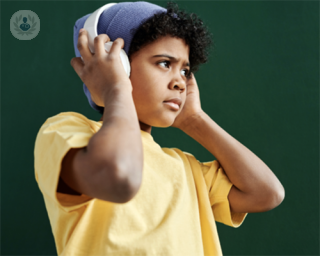 Tinnitus in children: is it common?

While tinnitus is often experienced by adults who are losing their hearing, it can also affect children. Mr Angus Waddell, an accomplished ENT surgeon, is here to give us further insight into the impact this condition can have on children who get it.
Read more

This website uses cookies to improve your experience while you navigate through the website. Out of these cookies, the cookies that are categorized as necessary are stored on your browser as they are essential for the working of basic functionalities of the website. We also use third-party cookies that help us analyze and understand how you use this website. These cookies will be stored in your browser only with your consent. You also have the option to opt-out of these cookies. But opting out of some of these cookies may have an effect on your browsing experience.
Necessary Always Enabled
Necessary cookies are absolutely essential for the website to function properly. This category only includes cookies that ensures basic functionalities and security features of the website. These cookies do not store any personal information.
Non-necessary
Any cookies that may not be particularly necessary for the website to function and is used specifically to collect user personal data via analytics, ads, other embedded contents are termed as non-necessary cookies. It is mandatory to procure user consent prior to running these cookies on your website.
SAVE & ACCEPT